10 Billion and Beyond: the Future of Aquaculture

el mayo 12, 2014
A post of Karl Andree for Spotligth on aquaculture

A Historic Milestone
In the last few years humanity passed two remarkable milestones. One was the population of the planet surpassing 7 billion, which was widely noted in all forms of media, and generally in a somewhat panicked and apocalyptic manner. And two, it was noted much more quietly that in 2012, for the first time in modern history, aquaculture production had overtaken cattle production. Given recent trends this second milestone being passed was predictable, and for that reason it may be that nobody gave this second event much notice.

But what are some of those trends that brought this to pass, and what are the forcing factors that made it, in a sense, predictable? Also, why should the average non-fish-eating person care? First, let’s look at the forcing factors. Cattle production has leveled off, even while consumption of beef in some countries has decreased slightly. Many areas where cattle ranching is practiced intensively – North America, South America and Australia – are close to capacity of their grazing rangelands; this limits possible increases in production. There are various reasons for reduced consumption as well, not least of which is the high cholesterol content in red meat and its negative health impacts. This is made clear to the public by a continuous supply of reports from health professionals, as well as negative propaganda from competing industries like poultry growers, regarding the health risks associated to red meat consumption. 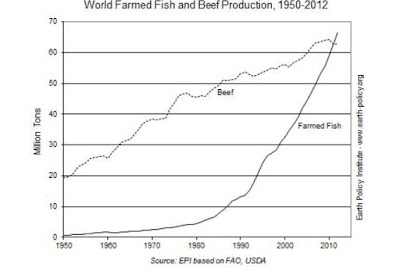 Fishing has always been a part of coastal communities, and historically it was a sustainable practice. However modern commercial fishing has developed to a stage where it is quite capable of outpacing the natural production of the oceans. World wide there are populations of fish that are in a steep decline with reductions of some species having exceeded 90%. Partly in response to these alterations of the marine environment, aquaculture has become more efficient and widespread in an effort to augment the decrease in wild-caught fish. There has not been a competition between cattle and fish production, it just turned out this way.

Fishing has always been a part of coastal communities, and historically it was a sustainable practice.

Game Over
Upon announcement that the human population had surpassed 7 billion there was a lot of negative press recalling various statistics that have been promoted over the years that the planet cannot sustain more than 7 billion people (or 5 billion, or 10 billion, depending on who did the calculations); to attempt to feed more than this is beyond the resources available on the planet. Like an apocalyptic video game – once there are more people than food to feed them, the world comes to an end (“and the zombies win!”). There are reasons to be excited and pleased about aquaculture overtaking cattle production. Cold-blooded animals are more efficient at converting the food they eat into the protein we eat. It takes 7 pounds of grain for a cow to gain one pound of weight, whereas fish only consume two pounds of feed to gain one pound of weight. Recalling world events of the previous decade relating to global food supplies you may remember the talk of a “post-petroleum economy” and the efforts to switch some grain production from animal feed to biofuel feedstock and ethanol production. This coincided with a couple bad weather years in the United States and Australia, two of the leading grain-export countries, which in turn lead to grain shortages, price spikes and food shortages.  Why are we digressing to the topic of fuel? (It’s all connected.) Because reduced usage of grain supplies to feed fish, instead of cattle, means the same quantity of protein can be produced to feed humans and still have grain for converting to more sustainable fuel alternatives (and by extension of this idea, it can also be used to produce more protein to feed more people). This may require a change in the mentality of those who refuse fish for dinner, but it will improve the health of those who do make the change.  And that change is coming.

Protein In, Protein Out
There are controversies that the aquaculture industry must address before it is widely seen as a solution to humanity’s future food supplies. Most notable among these is the source of protein used in feeding fish.  Top oceanic predators like tuna and swordfish currently are not grown in captivity for aquaculture. It takes smaller fish like sardines to fatten them for the market. Tuna captured and placed in net pens for fattening are removed from the reproductive pool in the wild, and this further contributes to depletion of wild fish stocks in much the same way as overfishing. Additionally, there is a net loss in biological energy when feeding on top predators as opposed to more sustainable alternatives like tilapia and carp which can be grown on a vegetable protein diet, or sardines which are farther down the food chain. To feed all of humanity with Siberian tigers is no more sustainable for the same reason. Instead, most terrestrial meat sources for humans are herbivores (cows) or omnivores (pigs). Carnivores like salmon and tuna by contrast need to be fed fishmeal, which originates in the oceans. However, progress has been made in improving the quality of fish diets with reduced fishmeal content. Soybeans, canola, and other grains rich in protein are being formulated as a replacement for protein originating from fish caught in the wild. On some salmon farms in Chile the fishmeal content is now as low as 15%. And this brings us back to the topic of improving the efficiency of the use of our grain supplies. We can all become vegetarian, or we can find improved food supply chains to convert vegetable protein into animal protein that are not so wasteful as cattle production (ej. – aquaculture).

Fish Don’t Fart
Another problem that has attracted a lot of media attention is the methane that cattle produce in their intestinal gases. The “carbon footprint” of both aquaculture and agriculture are of serious concern these days. With considerable global attention being given to climate change and the methane and CO2 gases that are produced by human activities (cattle production among them) seen as the primary driver behind climate change, it gives cattle production and by extension beef consumption, a bad reputation beyond just high cholesterol. These are part of the reasons that beef consumption has seen a slight decline in western countries even as rising Asian economies are increasing their consumption. 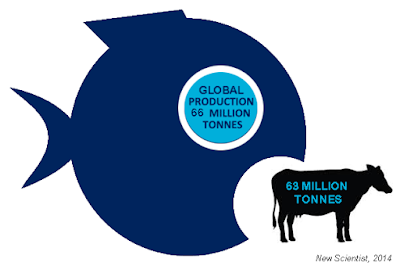 There have been several scientific studies published in regards to cattle and pig flatulence and attempts are underway to curb their gas production through modified diets and selective breeding. Fish by contrast must regulate their floatation, or buoyancy, to swim properly and no excess gas production in their metabolism can be tolerated.

They are not ruminants like cows. Whereas cattle on the other hand, have multiple stomachs and there is considerable fermentation that takes place inside their digestive tracts (think of the CO2 gases produced during fermentation of beer for example). Shellfish, such as oysters, are even better for the environment in terms of a carbon footprint and climate changing gases. The oceans have absorbed from the atmosphere some of the CO2 produced in excess and this is altering the chemistry of the oceanic waters. However, the carbonate of oyster shells is a very stable “carbon sink”. It removes CO2 from the oceanic waters, and this can help to balance the adverse aspects of the “carbon footprint” of aquaculture activities somewhat. Further, oysters and other filter-feeding shellfish like mussels and clams do not compete with protein sources used by humans, or require other significant energy inputs (read sources of CO2 output) for their growth.

The aquaculture revolution is officially now here upon us

The aquaculture revolution is officially now here upon us. It is a quiet revolution with great promise for providing sustainable protein sources for the burgeoning human population. So the next time you choose grilled sardines or marinated oysters instead of that grilled beef sirloin, you can remind yourself and feel good about how you are improving the air quality, the marine environment, and the sustainability of the food supply, as well as your personal health benefits.
Farmed fish Fishing Sustainability 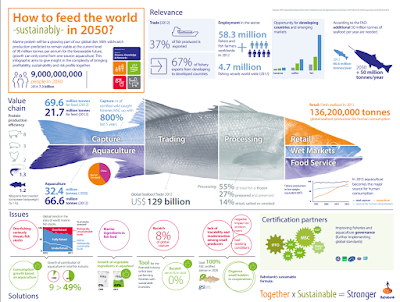 The sea begins to manifest a high disagreement with human intervention. The evidence of what the climate change is doing to the sea does not stop surprising us. There is more and more biological uniformity and it is becoming necessary to safeguard a minimum of biodiversity.
It is possible that we should dispense, in the short term, from the way in which we seek food from the sea. The hypocrisy of sustainable and adequate use of resources must be ended. We're not doing it and it's going to be harder and harder to do it. The time has come to leave the sea calm.
Fisheries and biodiversity are beginning to appear as antagonisms that are difficult to reconcile.
I will not say that aquaculture is the only solution, much less. It will be impossible to find a solution without a global and shared agreement. There are no magic solutions, there are inexcusable actions that must be done and, possibly, change the perception of fishing practices and aquaculture.
Aquaculture can not solve the pr… 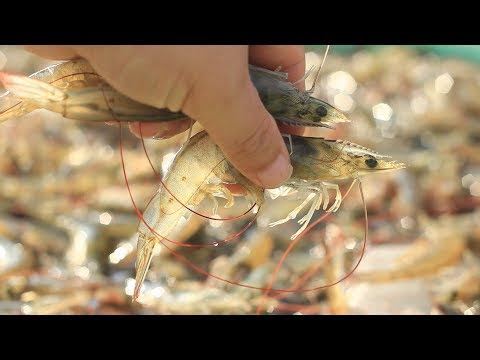 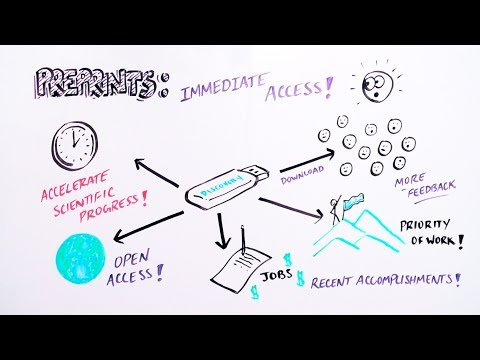